Time of Year and Weather: Saturday in early December. Race day was sunny, breezy at times, with temperatures in the 40s. Perfect running weather. This course has the potential to get windy, but I lucked out and it wasn’t bothersome.

Logistics: Race logistics were very, very easy.  We flew in to Charleston direct from DC.  We took an Uber to the island, about 45 minutes (~$40).  We ended up arriving in time for packet pickup on Friday night, but otherwise I could have picked up my shirt and bib on Saturday morning. Perks of smaller races!  We were lucky to be staying at the Kiawah Island Golf Resort in the East Beach Villas. This location was very easy walking distance to packet pickup and the start and finish line. Our villa was clean and plenty large and had a balcony and a full kitchen (which we didn’t either but thought they were nice to have!). The Sanctuary (very nice hotel at the resort) would also be a great location for easy logistics. There is a race-morning shuttle available from other areas of the resort, or there is parking about 0.4 miles from the start line. But it was amazing to be able to roll out of bed at 7 am, use my own private flushing toilet, and stroll over to the start just before 8 am. The most logistically complicated part was getting back to the airport after our stay.  I had figured we’d just Uber, but finding an Uber on the island is difficult; instead we were encouraged to use a private car service. This ended up costing over $100 (including tax and tip) to get back to the airport. If we’d anticipated this expense, we would have just rented a car since parking was included with our villa stay.  We didn’t find that we needed a car to get around the resort.

Swag and Amenities: Loved the nice-fitting long-sleeved tech tees. Went with size medium, and that was definitely the right move. Medal was fine – what you’d expect. No goodies from the expo or swag bags, but I’m OK with it. Plenty of restrooms on course, water stations and Gatorade, free Gu in a few spots, occasional oranges and bananas. Post-race food included brownies, white bean soup (unfortunately not vegetarian), several pasta dishes, coffee, and hot chocolate. I ended up just grabbing a free juice and walking back to the villa because my stomach felt a little knotted. There were also a few pre-race and post-race events, such as a Friday night buffet and Sunday morning yoga – but I didn’t take advantage of any of those amenities.

Course: I have run some really beautiful courses this year – most notably at Asheville and Mesa Falls. But after the two other mediocre beach marathons I’ve run in the past (Ocean Drive and Rehoboth), I wasn’t expecting too much from Kiawah. Um… It. Was. Beautiful. Not a ton of variation in the scenery, but for some reason I didn’t get bored of the lovely tree-lined streets and bike paths, ponds, marshes, and golf courses.  Mercifully, no alligators ate me.  My least favorite part of the course, by far, was a section on a gravel path, running between the shore and the Sanctuary. I felt each step sapping the energy from my legs. Luckily it was just a short section. Otherwise, the course was flat (fewer hills than Chicago, which is saying something!) and fast. The course was very winding, and I was concerned that would have an effect on my time. I did end up with a Strava distance of 26.9 (it usually measures a little long, but not that long), but as you’ll read below, my time didn’t seem to suffer.

Crowd: Between Chicago and the Vermont City Marathon, I’ve seen some impressive crowds this year. Kiawah had what you’d expect for a race of this size, in a place without a lot of “locals,” and not in a big city.  That said, it  had more folks cheering than the quieter Asheville Marathon or Creeper Trail Marathon.

What I Ate:  On Friday during the day, I drank Nuun and ate two bowls of Rice Chex with bananas and Silk Protein Plantmilk (oh, and Christmas cookies…). On Friday night, we got pizza from the Town Market at the resort, along with a Snickers ice cream bar. Duh. Pre-race, I had a gingersnap Stinger Waffle with Pro Bar caffeinated PB on it (um, YUM!), along with some Vega pre-workout energizer and a few sips of coffee. During the race, I had a pack of Clif Blocs between miles 7-13, and then a chocolate Huma gel around mile 16, and a few nibbles of a jet blackberry Gu around mile 20 or 21.   I also had a few sips of Gatorade on course.

How it Went: Let’s start at the beginning.  We all know that I ran Chicago two months ago in 3:42 flat. And we all know that I’m trying to qualify for the Boston Marathon by running 3:32:30 or thereabout. After Chicago, I was really questioning how. in. the. world. I was supposed to cut 9 or 10 minutes off of my Chicago time, after I felt so good at Chicago and was blessed with perfect weather, a fast course, etc. etc. So two weeks ago I started working with a nutrition coach from Renaissance Periodization to try to lose about 10 lbs before the Phoenix Marathon in February. Losing this weight was the best (only) idea I had to bridge the time gap. And honestly, I didn’t expect much from myself at Kiawah. I was worried that the diet might be wearing me out a bit while I was adjusting (although I got permission from my coach to carb up however I wanted in the days before the race, and I temporarily went off RP starting on Thursday before the race to prep), and I’d been dragging on my runs in the weeks before the race. Nevertheless, my A goal was to finish in under 3:40. Doing that, I told myself, would feel like I was making real progress towards that BQ. My B goal was to finish somewhere between 3:40 and 3:42, still getting a new PR. My C goal was to finish under 3:45, staying within the range of my Chicago performance. Another goal I had was to run negative splits. We’ve all been hearing a lot about negative splits, and how our bodies are less efficient when we start out too fast (i.e., “banking time” isn’t a good strategy). But even after 20 marathons, I still love to start my races “strong” and rarely, if ever, have run the second half faster than the first. I figured Kiawah would be a good race to play with the negative split strategy while I prepped my body for the real race – Phoenix. With that in mind, I found a spot in the corral between the 3:35 pacers and the 3:45 pacers. I figured I’d hover between those two for a while, without getting ahead of the too-fast crew and without getting too far off my goal finish pace. The 3:45 crew caught me pretty soon after the start, but that was fine. I decided to run with them for a few miles, getting warmed up. Eventually I was too annoyed with the big cluster of people (who were not running the tangents. at. all.) and decided to get ahead of them. I settled in just in front of the pack. I didn’t have splits written out on a wristband or anything, but I knew I wanted to run about 8:30 for the first several miles, and then come in around 1:50 or so for the halfway point. Shockingly, I executed this plan. I came into the 10-mile mats at 1:25:34 (8:34 min/mile) and the half at 1:49:24 (8:22 min/mile). At the half, I told myself, OK, you can totally do that again. Which was the opposite of how I felt racing into the halfway point at Chicago. I kept on trucking, trying to push a little bit but not too much and, of course, not slow down like I’m used to doing in the second half. I got a little screwed up with my math and wasn’t sure if I was quite on pace, but I tried to run by feeling. Miles 13-20 ticked by, and I felt good. I came in to the 20-mile mat at 2:46:11 (8:19 min/mile).   I was feeling the distance at mile 20, but I kept repeating my mantras: You are so strong. This air has so much oxygen. You are so strong. I passed a few half-marathon walkers and told them “You’ve got this, girl,” but I was really telling myself. By mile 23, I knew I was in good shape to finish under 3:40, but I wanted to give a little extra push just in case. At mile 24.2, I started counting down from 20, since I had 20 tenths left. I got to 19, and my brain liked that number, and 18 felt hard to say to myself for some reason, so I just rhythmically said 19, 19, 19, 19 in my head for a while. Then, back to You are so strong. This air has so much oxygen. You are so strong. In those last few miles, I was running near a woman who I’m sure — based on her hustle — was working to get to her BQ for the 35-39 age bracket, and she was looking super strong. I stuck close to her for a while, and then as I watched her run off ahead to achieve her goal, I was really proud of her.  For myself, I kept with my steady push. (Turns out, in the final six miles, I passed 46 runners, and only one runner passed me.)  When I finally (finally!) saw the finish line, I let my legs go and raced to the mats. I finished in 3:37:01 (8:17 min/mile).   And then, for the first time at a race finish line, I cried. 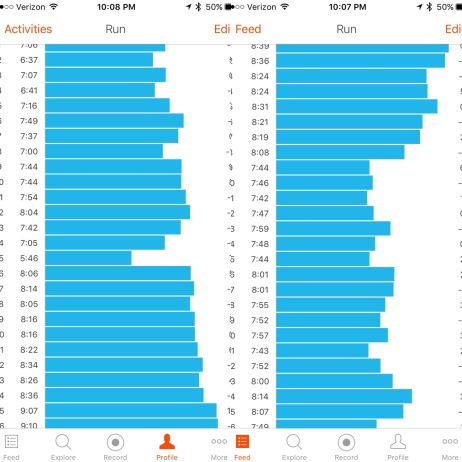 Chicago splits on the left, Kiawah on the right

Overall: Love it! You know what’s the best of all worlds? Running a lovely, well-organized race, having a relaxing weekend, and having a happy husband. This one went 3/3, and the PR was just a bonus (oh, and I think I should be receiving an AG award!). Most importantly, my precious, devoted husband — who tolerates traveling to ridiculous places so that I can abandon him for four hours and then be tired and dressed in sweatpants the rest of the weekend – was able play a wonderful round of golf while I was running.  I am super proud of my performance at this race, and I would highly recommend it to anyone else looking for a fast and/or low-key marathon.