Time of Year: Sunday at the end of March.

Weather: I had pretty unpleasant weather for this race.  It was chilly and damp and, toward the end of the race, rainy!  Expect wind.

Expo and Swag:  Expo is no-frills at the Wildwoods Convention Center.  Basically just packet pickup with a few small vendors.  Shirt is a nice long-sleeved tech tee.  You might want to size up.

Logistics:  Getting to this race would be tricky without a car.  The closest airports are in New York/Newark and Philadelphia.  I drove from DC and picked up my companion from NYC at the Atlantic City bus stop.   We were lucky to stay at a friend’s home at the shore, with just an easy drive to the start.  The start line was low-key.  We went into Uncle Bill’s Pancake House for heat, last minute coffee, and restroom use.  If you aren’t driving, there are shuttles to take you from the finish to the start and vice versa.  If you are interested in looking around town or going out to eat, just know that your options for shops and restaurants will be limited in the off-season.

Course and Terrain:  This was a mostly flat point-to-point course along New Jersey’s barrier islands, running north from Cape May to Sea Isle City.  The marathon and 10 miler start at the same point, and the 10 miler runners finish on the boardwalk in Wildwood.  The marathoners just keep running (which I totally did not want to do).  I was a bit disappointed in this course.  Although it ran “along” the coast, there were very few nice ocean views.  It felt like it was mostly residential or commercial areas, and not particularly pretty residential or commercial areas. There were few spectators except for at the start, Wildwood, and the finish.  I don’t necessarily need a lot of crowd support, but the race course wasn’t scenic enough to provide interest. 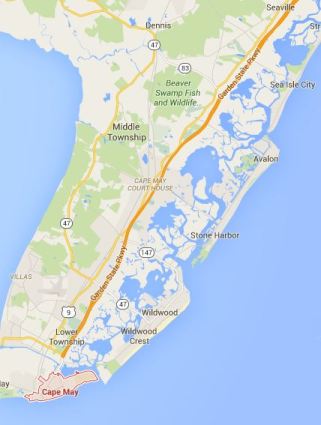 Speed:  If the weather cooperates (i.e., no rain and wind), this could be a relatively fast course.  However, this was one of my slower races, coming in over 4 and a half hours. I just really wasn’t feeling it and hadn’t trained particularly well.  As I described briefly in my Rehoboth Beach Seashore Marathon recap, I had been trying to BQ for a while but got totally off track with some work and personal stuff.  I did Harrisburg in November and was disappointed in my time, so I tried to just take it easy and not focus on pace for Rehoboth in December and then OD Marathon in March.  And the rain probably didn’t help.

Overall:  Not My Favorite.