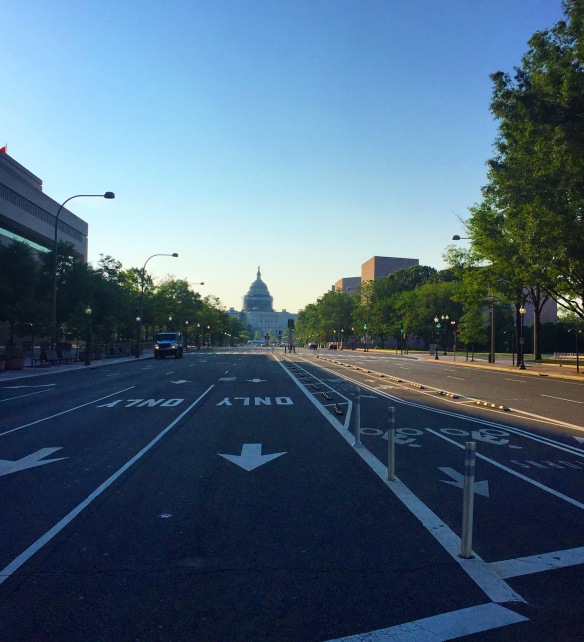 Tomorrow is the Vermont City Marathon! Woohoo! Stop by early next week for the recap. Here, I wanted to give a few thoughts about the race, my preparation for it, and most importantly, the taper I’ve been doing for the past two weeks.  In no particular order:

(1)  Tapering sort of sucks.   Basically you train until you feel really good and raring to go (I was even eating well and lost a little weight at the end of my training cycle!), and then you sit around for two weeks turning into a blob and freaking out about every little pain you feel in your hip, knee, neck, foot, ankle, etc.  At least that’s how it feels for me sometimes.

(2) OK one more rant.  The past few weeks have been pretty stressful for me, mainly at work.  Not only has the sheer volume of work been pretty intense, but I’ve also been asked to do some things that haven’t been my favorite.  It all culminated with a few days where I wondered, Is this my life?  Is this all I am going to do until I die? Is this the most I am going to accomplish in my profession before I have kids? Is this what I’ve worked so hard for?  I think I have it under control now but I definitely did some stress eating during my taper, and I probably didn’t sleep as much as I should have.  Stress takes such a toll on our bodies, so I really try to avoid it, especially before races.  Better luck next time?

(3) On a more positive note!   I did a few fun things during this downtime.  At the beginning of the taper, I met up with a friend at Soul Cycle and grabbed salads for dinner after.  I’m unlikely to ever be a regular at SC, for various reasons, but it was a fun evening with my friend.  I also went to one Orangetheory class last Thursday — basically the only running I did during the taper, except for a shakeout run today — and it was great.  It was an endurance session, and the goal was to run as far as possible during the 22.5 minutes of treadmill intervals.  I really pushed myself and ended up running a little over 3.14 miles.  My goal was to do a 5K, so I was so glad to have surpassed that.  I felt strong.  Then, last weekend, when I was in full-third-of-life-done-crisis mode, I went horseback riding.  It was exactly what my soul needed.  My muscles didn’t even feel as atrophied as I had expected, given that I haven’t ridden in months.  I also went to pilates twice during my taper.  I haven’t been going to pilates very much these past few months, but I’m glad I jumped back in.  I had hoped to get to the pool at least once during the taper, but it didn’t happen.  Same with yoga.  Again, maybe next time.

The horse didn’t want to cooperate for a selfie.

(4) Carbloading.  I’ve been hearing some chatter about how carbloading is overrated.  Well, I’m still upping my carbs for a few days just to be safe.  However, as mentioned above, I did some stress eating last weekend and early this week (namely, all the Halo Top ice cream I could find, two batches of homemade biscuits, pizza from the pretty crappy pizza place near my office, and various other junk), all while I was “supposed” to be eating pretty clean.  So then Thursday rolls around and I’m supposed to start carbloading…  Well at that point I felt totally bloated from all the salt, my stomach felt off from no veggies, and basically I was not hungry anymore.  It’s interesting how our bodies talk to us if we listen.  So I’ve been mainly snacking on Ezekiel bread, plain pasta (sometimes with avocado because it is just so darn good, even if it isn’t carby), a ton of fruit, and a daily kombucha to try to get back to feeling OK while still getting the carbs (I think) my body needs.

First batch of biscuits, before baking.

(5) In typical pre-marathon fashion, my achilles started bothering me yesterday.   Sort of the way it bothered me before the Asheville Marathon, just an ache but still annoying.  Before the Asheville Marathon I iced it and ended up being totally fine during the race.  So last night, I did some calf stretching and also did some self-massage with the foam roller and by hand.  Then I just laid off it.  When I woke up this morning it felt better but I’m still being cautious.  I’m taking a break from my zero-drop shoes until after the marathon, just in case that is aggravating it.  Hopefully it stays pain-free for the race.

(6) This morning I went for a shakeout run, something I’ve only done a few times before.  Especially since these past two weeks have me feeling wonky, I wanted to make sure my legs knew their job. Of course I took it easy, and I only went a little over a mile.   I felt fine, not awesome, but fine.  READY OR NOT!

(7) OK, so the race.  It is supposed to be HOT HOT HOT.  Which might be OK if the race was in September and I’d been running in heat all summer.  But it’s been in the 50s and 60s most weekends all spring — until now.  I am definitely not acclimated, so I’m going to be diligent about taking in water and grabbing ice where it is available.  My goal is to finish the race with a PR (3:44:46) but if the heat gets in the way, I’m not going to kill myself for it.  I’m hoping to run with a 3:45 pace group if I can find them.

(8) During my taper I developed an interest in mountain climbing.  Not an interest in participating in mountain climbing.  But learning about it.  It all started with a Sunday afternoon of Netflixing.  I discovered the documentary Meru, which is about a group of guys trying to climb a giant wall-mountain situation.  I love documentaries, and this one was really good.  Incredibly fascinating.  I highly recommend it.   Jon Krakauer was interviewed for the documentary, so of course then I had to go read Into Thin Air, which is about a disaster on Everest.  I read it all in one day and now I walk around talking about it like I am an Everest expert.

OK first things first: Who has recommendations for more documentaries and/or books about Everest and/or mountain climbing?  But also: Do you struggle with the taper?  How do you keep yourself from feeling like a blob?  What do you eat when your tapering — do you let yourself go a little, or get more strict because you’re not working out as much?  Hope everyone has a fabulous holiday weekend!