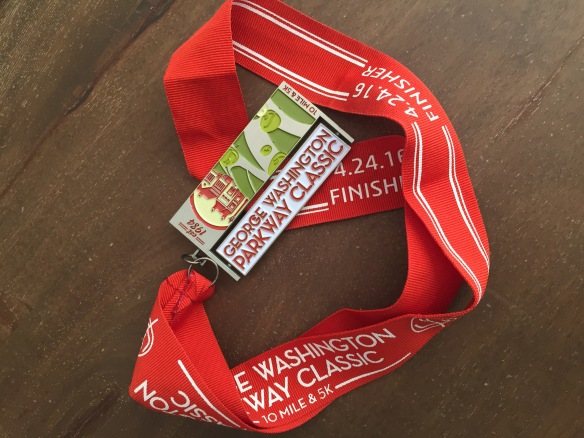 This morning I ran one of my favorite races, one I keep coming back to year after year, the George Washington Parkway Classic, a 10 mile race put on by local DC running store/empire Pacers.   I did this race for the first time back in 2012, then again in 2013 and again in 2014.  I took off in 2015 because I was in Paris getting engaged.  #sorrynotsorry.   As I’ve written about before, my times happened to get slower and slower each year.  UNTIL THIS YEAR!!!!

But first.  A bit about the race.  This race is held every April on the, appropriately enough, George Washington Parkway.  GW Parkway is a 25-mile-long (40 km) parkway that runs along the south bank of the Potomac River from Mount Vernon, Virginia, northwest to Langley, Virginia, and is maintained by the National Park Service.  For driving, it’s a pretty nice road — way nicer than driving on a highway.   And there is a running path, called the Mt. Vernon Trail, that goes along a portion of it.  I’ve written about that on my DC running page.  But once a year for the GW Classic they close the Parkway and we get to run on the actual road.  The race starts at Mt. Vernon (George Washington’s home, if you missed history class) and ends in lovely Old Town Alexandria, Virginia.   The first four miles have mild rolling hills, then it’s flat/downhill for a while, and then a few hills in the last couple miles.  Overall, this is a fast course.

I started up near the 7:00-7:59 pace corral, knowing that my goal was to run 8 minute miles and finish under 1:20.  I did some dodging for the first mile or so and ended up with a pretty stable group of folks going my pace.  Which was 7:11.

I knew that wasn’t sustainable — my stomach was already getting a little knotted — so I tried to settle in but stay below 8 minute miles. By mile four or so my stomach relaxed (thank goodness) and I’d been averaging about 7:30.  I had stored up some time, so I felt confident that I could come in under 1:20.  Even if I could stick with 8 minute miles for the rest of the race (which was so refreshingly short compared to marathon!), I’d still PR.  I just had to stay in the uncomfortable “tempo” zone for a while longer.  At mile 5 or 6 there was a fantastic stretch of flat/slight downhill that was a nice break for my body, and by mile 7 I felt rejuvenated.

A little before the 9 mile marker, we turned off GW Parkway and headed into Alexandria.  There were a few hills and turns, but I knew I was close to the finish and just needed to keep the legs going.  When I saw the finish line, I tried to give a little kick but I was also trying not to barf.  I came to the finish just as the clock was saying 1:17:00, and, as I said, the chip time was 1:16:43.

I hadn’t wanted to break stride during the race, so I hadn’t had any water.  I grabbed a bottle and some pretzels, picked up my medal, and headed back out towards the course to see if I could watch my husband finish.  (He finished way faster than I had expected, so although I think he ran right past me as I was walking down the course, I wasn’t even looking for him!)  We met up with a friend and enjoyed the post-race activities (actually, we sat in the grass at the park at the finish and then stood with her in the long beer line).

It was a beautiful day and once again a fun run.  Of course even more fun to get that PR!!!

What did you do this weekend?  Do you have a favorite local race you keep running again and again?