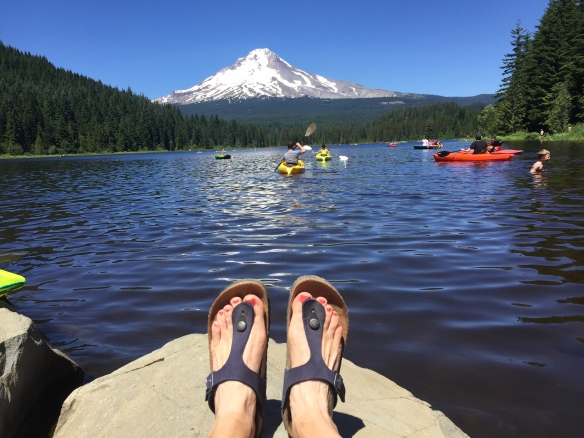 Location:  On the Pacific Crest Trail and around Timothy Lake, in Mt. Hood National Forest, about 1.5 hrs from Portland, Oregon and at about 3,225 ft above sea level

Time of Year:  50 miler on Saturday, 50K on Sunday, in July, aka peak berry season aka ideal Oregon visiting season

Race Size: Small — just 145 people in the 50K.  Sign up early for this one or else you’ll find yourself on the waitlist!

Logistics:  I tried to keep the costs down for this one, and it made my trip a little more logistically complicated, but it really wasn’t too bad.  First I flew from BWI to Portland, with a short layover in Salt Lake City.  I stopped in Detroit on the way home.  I am usually nervous about non-direct flights, but everything went smoothly and I even got to log some Priority Pass lounge time at a couple of airports during this trip.  I left DC early on Friday morning, took an Uber from the airport to my Airbnb near Portland State University (great, walkable spot) and spent Friday afternoon and Saturday morning touring Portland.  I walked way too much and destroyed my feet/legs.  Oops!  Then I picked up a rental car (back at the airport!) and drove out to the Mt. Hood National Forest.  I camped for $30/night at the Clackamas Lake Campground (HIGHLY recommended for this race given proximity to start and the price, but note that the campground has no running showers/mirrors/sinks/flushing toilets in the bathrooms).  I drove about 0.5 miles to the race start on race morning, picked up my bib, and headed out for the run.  After the run, I drove back to Portland, where I stayed for another night at a Courtyard Marriott (my jam with the points) before leaving late Monday on a red-eye.  This was one of my more logistically complicated trips, but I feel like I saw and did a lot and maybe saved a little money in the process.

Expo and Swag:  This race had no expo, which was fine with me.  Packet pickup was the morning of the race.  Race finishers were given a cool glass (to be filled with free beer at the finish), and I also happened to win a hat in the raffle.

Course:  The 50K takes place on a nice, heavily-shaded trail (yay, no sunburn!) on the Pacific Crest Trail and around Timothy Lake. Runners start by running north from the Clackamas Ranger Station, along the eastern edge of Timothy Lake, and then to the Pacific Crest Trail.  The PCT section is out-and-back but I didn’t mind it at all.  The race was small enough that sharing the trail wasn’t hard, and it definitely wasn’t boring.    There are many miles with views of Mt. Hood, and photographers on course to capture the backdrop with us running in the foreground.  When we returned to Timothy Lake, instead of retracing our steps, we ran counter clockwise around its other side.  There were six aid stations on course, and they were well-stocked with very nice volunteers and the essentials such as soda, sports drink, a variety of gels, Pringles (my fave), candy, PBJ, etc.  There were no crews or drop bags, but they were really not necessary.  I didn’t even eat any of the food I brought!  The trail was generally soft with good footing, although there are some technical sections with rocks and roots.  VERY different than the Dirty 30.  Total elevation gain was approximately 2,723 feet, making this a gentler trail ultra.

How It Went:  This race was low-stress for me, having already completed the much more difficult Dirty 30.  I did not do any targeted training for this race and honestly hadn’t been doing much running.  I didn’t wear a watch and didn’t check Strava on my phone.  Given this attitude, a big par of me wanted to do more chatting during the race, but  I wasn’t able to find a running buddy to pass the miles with.   That said, I loved seeing this part of the country, and the views of the mountain did not disappoint.  But my biggest takeaway from the race was a revelation that is almost too shameful to admit: I’m not sure that I like ultras.  I love running and I love trails, so it seems like ultra running should be my jam.  But it’s just so much freaking time out on course.  And a 50K is considered the pansy ultra distance!  And this wasn’t even a hard race!  Going into this race and even during the first several miles I thought that maybe next year or in a couple of years I could come back and do the 50 miler.  But by mile 27, I was just thinking that my body and mind were both over it.  It was nothing against this race, but after two ultras I’m thinking maybe 26.2 is just my sweet spot…  So as lovely as this race is, I might be taking a break from ultras for now.  I’ll definitely still be running and enjoying trails, but at shorter distances.

Overall Impression: I am going to give this race a LOVE IT, because it was really well organized and low-key, had awesome volunteers and aid stations, and was in a beautiful part of the country.

Things To Do/See in Portland: