I was going to write a blog post titled “Big Adventures Start Small” about how I’m trying to inject small adventures into my regular life, at least until I decide on and execute a “big” adventure. And I had a small adventure planned for this morning and was excited to recap here. Until I had a total #adventurefail…

It all started with this bike: 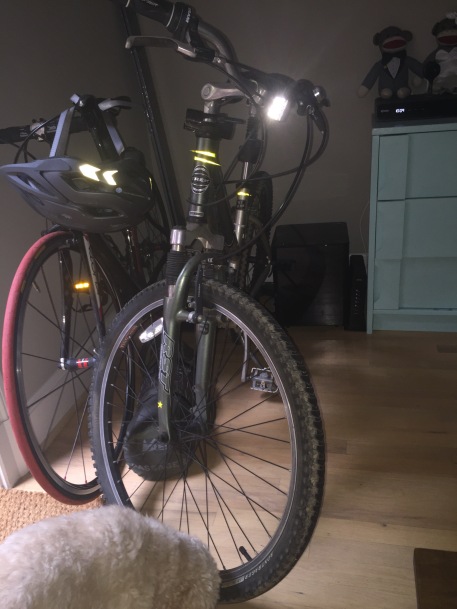 The one on the right.

A few weeks ago, my husband and I went for a morning hike on Billy Goat Trail Section A, a fun and popular hike just outside DC. The drive there wasn’t bad, especially early in the morning on a weekend, but I realized that we didn’t need to use a car to access the trail (and the other trails nearby, and an area where a lot of folks do rock climbing): we could use the C&O Canal towpath, a gravel biking and running path that happens to begin right in DC, just a few miles from my front door.   So that same weekend, I went out onto my patio and removed the dusty bike cover from my old mountain bike.  This bike has seen many miles on the Virginia Creeper Trail, but not much of DC.  More often, I ride my road bike, which is stored in my bedroom.  (My husband’s road bike is in the living room. So you see the hierarchy of bikes in this household.)  After three years on the patio, my chain and gear were totally rusted, so I took the bike to the local bike shop and after a super long and mystifying conversation with one of the nice but very odd employees, we got the bike in working condition.  (Over $100 in costs for a bike that was $400 brand new…)

The next step?  Ride it to the trails!  And that’s exactly what I had planned for this weekend.  I would get up early, put on my running gear, and load up my Nathan hydration pack with water and Dr. Praegers healthier version of uncrustables:

I’d bike about 13-14 miles to the Carderock Recreation Area parking lot, where I’d lock up the bike with this lock:

And then I’d run some trails!  I even went so far as to print out a physical trail map and trace the route I wanted to take: I’d start with Billy Goat Section C, then Section B, then Valley Trail, and Gold Mine Loop, then head to the Great Falls Overlook, and head back to my bike via Berma Road and the towpath.  It would be between 10 and 15 miles of running.

We all know what they say about the best laid plans.

I got up early this morning, put on my running gear, and loaded up my Nathan hydration pack with water and Dr. Praegers healthier version of uncrustables.  I maneuvered the bike out to the street (it’s living inside now that it’s been gussied up) and set out for the towpath.  The streets were mostly empty and DC has some great bike likes, to the trip to the towpath was pretty easy. I was off.  I was really doing it!  My small adventure!

The bike ride was nice.  The day hadn’t yet warmed up, the sun was behind me, and the lush trees cast shadows across the path.  Through the dense greenery, the river quietly flowed to my left.  My shoulders were sore from Orangetheory and the November Project this week, but the riding was flat, so I could go one-handed and shake out one arm at a time.  The bike lock occasionally slipped down on my shoulder but wasn’t too cumbersome.  The path is a bit rougher in a few spots, and I felt like I was really mountain biking, and not just pedaling along a suburban rails-to-trails path.

Just before mile marker 10, I saw the trailhead for Billy Goat Section C.  Yay!  I would just bike a bit longer until the Carderock parking lot, then I’d jog back on the towpath to this spot to begin my run.  Sure enough, I soon arrived at the parking lot for the next leg of the journey.

Then I faced my first challenge, which I thought would be the main challenge of this adventure.

The parking lot did not have a bike rack.

This is 2016, and the parking lot is adjacent to a major bike path, SURELY it would have a bike rack, I had assumed.  Nope.  As I devoured my delicious uncrustable, I found a volunteer “bike patrol” person and asked if maybe there was another parking lot with a bike rack?  He suggested I go to the Great Falls visitor center, about 4 miles up the towpath.  That would have been doable, but not ideal.  He motioned to an ADA railing leading to the restrooms and told me I would try to lock up there.  That seemed good enough.

I took off my pack, grabbed the lock off my shoulder, and positioned the bike on the outside of the railing, off of the sidewalk, down in the shade, and hopefully deep enough in the vegetation that someone who wanted to steal it might be dissuaded.  Feeling satisfied with that spot, I stepped over to the sidewalk side of the railing to secure the lock.

And this is when I faced my second, ruinous challenge.

The lock was stuck locked. The key had apparently fallen out sometime during the ride.

I texted my husband who helpfully replied “didn’t you take the key out and put it somewhere safe for the ride?”  UM… NO!  That would have been too logical!

Feeling like a total idiot, I did the only thing I could do.  I backed up my bike, picked back up my pack, flung the lock on my shoulder, and biked back home, occasionally scanning the ground for the glint of a key.

Have you ever had an #adventurefail? Let me know so I can avoid it!

9 thoughts on “Worst. Adventurer. Ever.”