Where: Mesa, Arizona, just a few miles outside of Phoenix.  Race started in Usery Mountain Regional Park and ended in the Mesa Riverview shopping center.

When: Saturday on the last weekend in February.

Size: I liked the moderate size of this race.  2000 marathon runners. 4000 half marathoners.  No issues with the half runners being in the way, at least that I remember.

Expo and Swag:  Expo was at the Marriott.  The expo had only a few vendor tables set up, but there were actually some usable goodies in the swag bag, which is rare these days (a few different vitamins/supplements, a Hello Fresh coupon, antibacterial hand soap, a temporary tattoo).  There was also free Muscle Milk at the expo, but it sort of made me feel gross so I stopped drinking it after a few sips.  Race shirt was a tech tank top, which was nice, but if I had known the style, I would have ordered a size down (S instead of M).  On-course aid was good — water and Gatorade at each stop, plus some gels at one or two aid stations.  Cold towels at the finish were money.  Medal was high-quality, sort of in the shape of an arrowhead, causing my bag to get flagged/searched at the airport.  TSA: Um, ma’am you have what looks like an arrow in your bag?  Me: I have no idea but am kind of curious what you are talking about…

Course Overview:  Point-to-point course on pavement.  Moderate crowd support.  Overall downhill profile (nearly 1000 feet of net elevation loss), with a couple of rolling hills in the beginning of the race.  First half is scenic/cactus filled as the sun rises (really pretty) and second half is less scenic but not terrible through Mesa, AZ.  Fast course.

Race Logistics:  I liked this race but there were some pretty significant logistical issues that need to be hammered out before I could love this race.  The good: Getting to Phoenix was easy.  I flew direct from BWI on Friday morning and picked up the rental car (Uber also available, but I’ll tell you why I rented in a minute) at the airport.  It was a short drive to Mesa from the airport.  I was able to arrange a late checkout on Saturday at the Marriott due to status, so that was also easy.  The not so good: Pretty much everything else… I thought I’d go the “easy route” and stay at what I thought was the host hotel — the Marriott that hosted the expo.  Wrong move!  The Marriott is 3 miles from the Mesa Riverview shopping center where the race buses pick up for the start and where the race ends.  I assumed I would Uber to Mesa Riverview, but at the last minute, I got nervous about getting a ride in Mesa (again, not downtown Phoenix) so early in the morning (4 am) and ended up renting a car.  Parking at the hotel was BONKERS while the expo was going on.  It turns out there was an extra parking lot, but there were no signs or volunteers telling us where to go to find it.  I followed some people coming out of the expo and nabbed their spot.  It was a stressful start.  On race morning, there was no transportation options from the Marriott to Mesa Riverview, so I drove myself.  It should have been easy, except certain roads were already closed off, despite the fact that the race hadn’t started.  So Google maps was no help.  I don’t know why the race didn’t provide turn-by-turn directions to the buses from the Marriott, given the number of runners staying there.  I did an illegal turn and ended up making it to the Mesa Riverview parking lot, but again, a little stressful.  Bus boarding was fine, and I chatted with nice people during the 30ish minute ride to the race start.  I was told that there would be “plenty of heaters” at the race start, so I did not bring pants or a jacket — just a long sleeved shirt that I would put in my checked gear bag for the race.  Turns out the heaters at the start produced approximately zero degrees of heat.  There were fires that looked cool and gave off more heat than the heaters, but they also gave off smoke.  Not exactly what the lungs were craving before a BQ attempt.  I luckily got there early enough to stake out a spot on the non-smoky side of a fire pit and again chatted with some nice people. 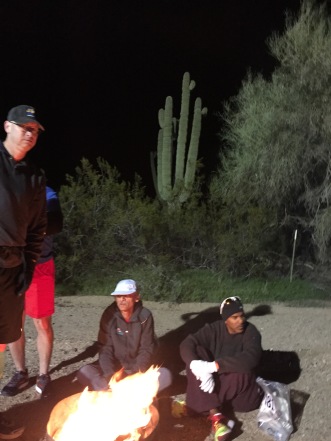 I knew I would have to pee once more before the race (I left the hotel approx 2.5 hrs before the race start!) so around 6 am I headed over to the porta potties.  Of course there was an ABSURD line.  The race announcers said that if we tried to pee behind the bushes, we would be attacked by cacti and/or given a ticket.  Nevertheless, I was really tempted.  The race announcers also said that there were no porta potties on the first new miles of the race, so basically everyone was trying to go before the start.  It was SO COLD in the bathroom line, which was too far from the fires to get any of the residual heat.  I stood there shivering and thinking about how much energy my body was wasting.  I was irritated.  Plus, my phone was down to 32% battery because of the cold.  As I neared the front of the line, 6:30 am came and went.  Finally, I was able to relieve myself without legal action/cactus attacks and hustled to the start line, where trucks took my gear bag.  I was off.  Next issue with logistics: THERE WERE NO CLOCKS ON COURSE.  Not at the start.  Not at mile 1.  Not at the half.  Nowhere.  Well, there was one at the finish, but I had no clue how much I had started behind the clock time, so it was pretty useless.  Needless to say, I did finish.  And then I faced another set of logistical issues.  The gear bags weren’t organized well, so getting the bags took for.ev.er, or what felt like forever when you’ve just run a marathon and don’t want to stand there waiting.  Luckily, I spotted mine and was able to get a volunteer to grab it for me while she was searching for someone else’s.  Bag in hand, I sat on a curb to eat my french toast and then headed back to my car. But where was my car?  I had to ask several people, but I finally found the full marathon parking area and my car.  (I was NOT the only one confused and looking for help in this regard!).  And then I spent about 45 minutes trying to get out of the dang parking lot.  Best three recommendations for folks running this race:  (1) STAY AT THE HYATT right near Mesa Riverview. (2) Bring warm clothes to the start line.  (3) Get in the bathroom line way early.   Best recommendations for the RD: (1) Offer transportation from the Marriott. (2) Don’t promise warmth at the start line. (3) Add more porta potties at the start line or be more understanding of people peeing in nature.  (4) Get race clocks. (5) Provide a better way out of Mesa Riverview post-race.

How It Went:  GREAT!  I got a big, big PR and BQ at this race.  See what went through my mind here.  See what I think helped me improve my time here.

Overall Impression:  Like It.  This would be a great race for a PR or BQ attempt.  In terms of travel, it was also pretty low-cost and straightforward, so I guess it is a good choice for a 50-stater (although there are probably more scenic or interesting races if you have the flexibility).   All the people I met at the race were super nice, and I got a decent “feel” for the state, I think.  Due to the logistical issues described above, I’m not likely to do this one again or recommend it for others except for those looking for a fast course.

What To Do in Phoenix:  Phoenix is the sixth largest city in America but doesn’t have a reputation for being a particularly desirable place to visit.  That reputation is pretty consistent with my experience there.  Not a ton going on for tourists, but probably a very nice place to live.  I started my trip by stopping at La Santisima for vegetarian tacos (I tried the La Santisima, Buddha, and coliflor tacos) and the salsa bar.  Guy Fieri liked it, so it has to be good, right?  (Kidding!)  I totally ordered wrong (esp re: the coliflor taco) and probably should have gotten “burro”, but this place had a nice local feel to it nevertheless.  Next, I headed to the Desert Botanical Garden, hoping to see some awesome, unique flora.  Entry was $25, but I was willing to pay that because I had read some good reviews.  But after visiting, all I can say is… Eh.  Sure, the big saguaros were cool and made for some OK selfies, but pretty much everything else was either a normal cactus, an aloe plant, or an agave plant.  Not a lot of variation or special plants (especially compared to the FREE U.S. Botanic Garden here in DC). 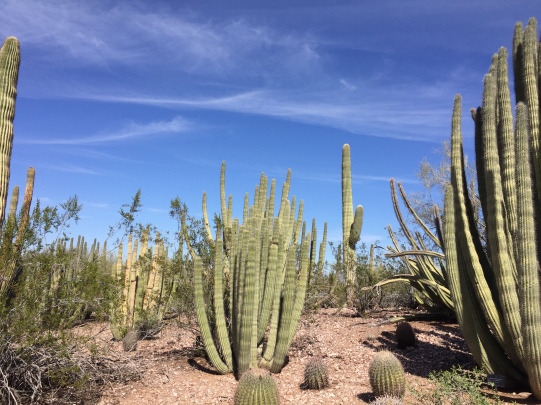 After stopping back at the hotel and the expo, I went to natural grocery Sprouts to get some food for dinner and some race morning snacks.  (There weren’t a ton of appetizing dining options in Mesa for the solo vegetarian traveler…).  After the race, I showered and ventured back into town for the Phoenix Vegan Food Festival, which happened to be the same weekend.  I paid $20 to enter this event and assumed there would be ample yummy vegan treats to try.  Nope.  I had ONE sample of a pretty gross vegan cookie.  All other foods and beverages cost money and, more importantly, had super, super long lines.  Really disappointing.  I ended up getting a just-OK asian rice/tofu thing (the line was long but more reasonable than some of the others; this was also a pretty RP-complaint post-race meal) and sitting on the lawn area listening to the live music.  I suppose it wasn’t a terrible way to spend the afternoon post-marathon…

After a few hours at the festival, I hobbled back to the rental car, drove to the airport, and boarded a plane to Tahoe.   No need to spend another night in Phoenix for me… but at least now I can say I checked it out!  (If I had stayed longer, I might have checked out some of the hiking in the area — I had no idea that Phoenix was so mountainous!)