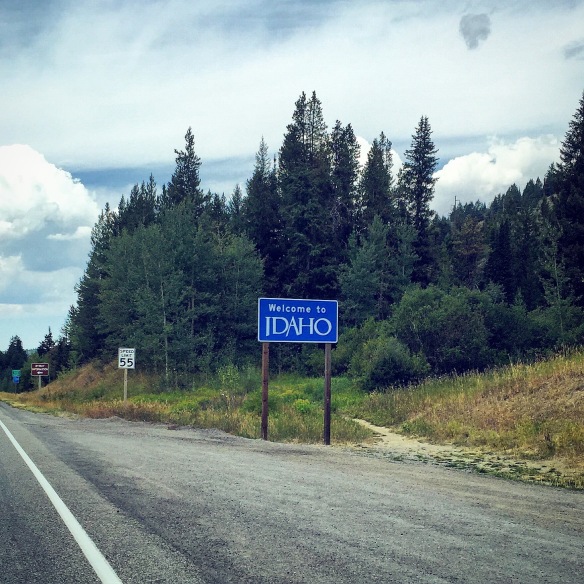 Sorry for the delay!  I traveled around after the Mesa Falls Marathon (post on that travel to come!) and wasn’t able to do a write up right away.  But here it is!

Location: Finish/packet pickup was in Ashton, Idaho, in eastern Idaho about 2 -2.5 hrs from the Jackson Hole, WY airport.  Note for sea-levelers: Ashton is 5,259 feet above sea level (and note, a week of easy running at a similar altitude is not sufficient acclimation).

Time of Year: End of August, on a Saturday.

Weather:  Can vary, but for me it was wonderful — started in the high 40s at 6:30 am and ended in the low 70s, I think.  Temperature felt good the whole time running but a little cold standing at the start.

Course/Terrain:  A point-to-point course starting in Targhee National Forest and ending in City Park in Ashton, ID.  Net decline in elevation, but some significant uphills for miles 17-20(so brutal).  First nine miles on gravel, then a few miles on pavement, then a few miles on non-technical but sandy singletrack, then back on the pavement.  Half starts 2 hrs after the full and merges onto the course. 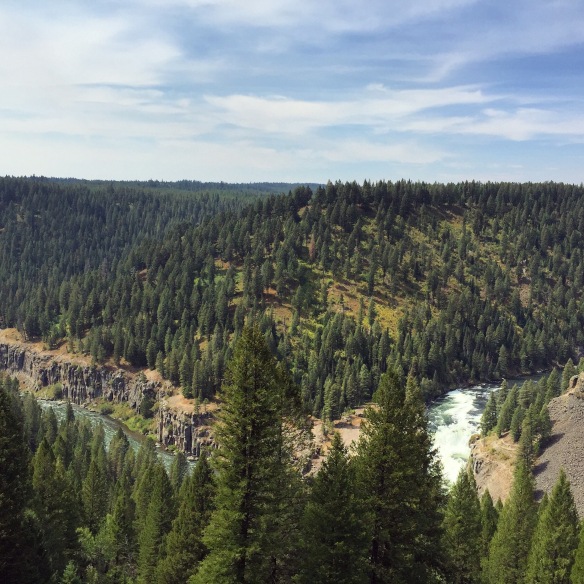 Logistics:  Early on Friday morning, we flew out of BWI, through Salt Lake City, into the Jackson Hole Airport.  I don’t love flying out of BWI, and I don’t love layovers, but this is the price to pay to run the Mesa Falls Marathon, I guess.  We rented a car in Jackson and drove 2-2.5 hrs. to Ashton, ID.  Parts of the drive were really pretty.  Other parts were really boring.  We stopped at Ashton Elementary to pick up my packet.  No drama there.  Registration was still open, and my mom decided to sign up for a 5K.  We stayed at the Angler’s Lodge in City Island, ID, about 20 minutes north of Ashton.  This hotel was very cozy and clean, the guy at check-in was friendly, and the location was convenient to the start.  Don’t be scared by the fact that Angler’s Lodge was featured on a show called Hotel Hell with Gordon Ramsay.   We didn’t get a chance to try the food at the restaurant, but it looked nice as well.  The morning of the race, we drove down to the start, about 20 minutes away.  Once on the Mesa Falls byway, there were some signs clearly noting the turn, which I appreciated.  You cannot leave a car at the start for the whole race, but my mom was able to park, see me off, and then move the car down to Ashton.   There were also buses from Ashton to the start line for those who stayed in or drove into town.   There were sufficient porta-potties and trees at the start.  (I tried both.  WOODS!  NATURE!)  Post-race, I grabbed a $5 shower in town (there was a little bit of a wait), snapped up my milkshake, and headed up to YELLOWSTONE  (boom, surprise! THIS THING IS RIGHT NEAR SOME KILLER NATIONAL PARKS!  I’ll do a full write-up and link back to it here.)

T-Shirt/Pre-Race Dinner/Swag:  I liked the long-sleeved t-shirt we got for the race (I always get a women’s medium if it is a long-sleeved shirt, and that was definitely the way to go for this one).   Our packets were in Idaho potato bags — cute.  Swag was shockingly good for such a small, low-key race — a body-glide-type product (always need that!) and a blister-fixing kit.  I’d never been to a pre-race pasta party, but I decided to try out this one for a few reasons: (1) this is a small-town, intimate race, and it seemed like fun bonding with the community and runners; (2) there didn’t seem to be a ton of dining options nearby, and (3) (most key) Ryan and Sara Hall were there!  That’s right, folks.  Somehow this race drew in uber-runners Ryan and Sara Hall, who spoke at the pasta party and ran the half marathon.  Was the food amazing?  Nope.  But it cost $5, was vegetarian (meat options available), and included a fun, unforgettable experience.  Of course I got a photo taken with Ryan and Sara like a total fangirl.  During the race, on-course aid stations were typical and adequate.  The finish medal was small, simple, and made of wood.  Seemed appropriate for a nice little race like this one.  At the finish line, we got a coupon for a free huckleberry milkshake.  (This may or may not have been what piqued my interest in this race in the first place.)  It was delicious.  Post-race food was pizza, chocolate milk, watermelon… I can’t remember what else.  I just ate watermelon. 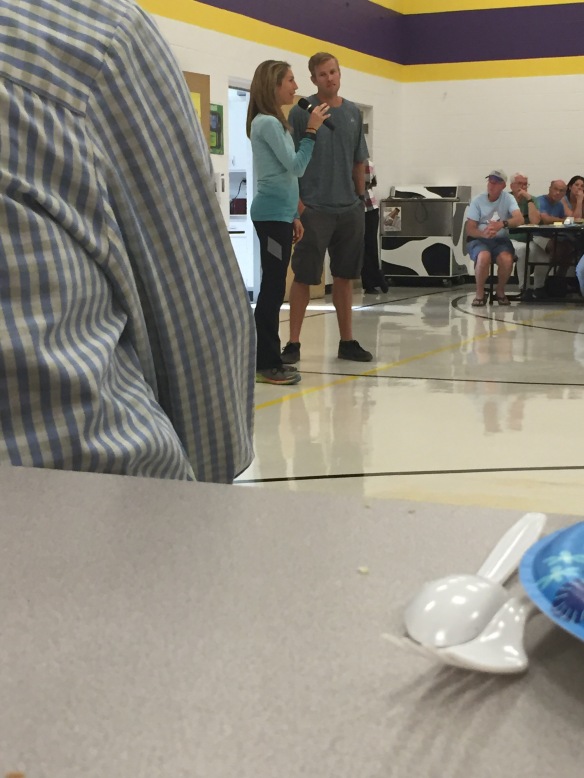 How It Went For Me:  OK, first the positive.  This race course was beautiful.  Really pretty.  Potentially the prettiest marathon I’ve run so far.  There is even part of the course that passes a lookout onto — you guessed it — Mesa Falls.  Real falls!  The weather was perfect, and we started just as the sun was rising.  I didn’t see any animals, but others might have.   It seemed like prime animal habitat.  The people were also really nice.  Shoutout to the two folks from Idaho Falls who protected me from mythical bears in the first 10 or so miles, and to the vegetarian woman from Boston who accompanied me through “Bear Gulch” later in the race.  Spoiler alert: all of these people finished before I did!  OK, so I started the race feeling really strong.  My training had gone well, I felt rested, and I’d been feeling pretty svelte before the race (still not goal weight but getting there…).  The cool morning felt great, and I knew the race had a net decline.  So, I started pretty fast.  Other than the first mile (9:10), I was well below 9 mins/mile for the first 16 miles (8:34 min/mile on average for first 16, including 8:07 and 8:05 for miles 13 and 14).  If I had kept that pace for the last 10 miles, I’d be reporting to you about a new PR.  Which was, in fact, my goal for this race.  But after mile 16, my race, like the Snake River, took a turn.  By the time I hit the hills, my legs were total toast.  We are talking 12 mins/mile toast.  Walking hills toast.  Here are my splits for 17 through 26:

10:02 (wait, this looks pretty flat but still feels like hills),

That last mile pace was only possible because I counted down by 10ths of a mile and focused on pushing hard to the end.  Final time: 4:09:08.  Fourth in my AG (of seven…).  I really wanted to place since this was such a small race, but the third place woman in my AG was way ahead of me, so there was no chance I was going to catch her.  Eh.  So what went wrong?

(1) DAMN, downhills! We think these are supposed to be easy but the internet is telling me that downhill running is really hard and can burn out your legs (luckily for me, you can find something on the internet to justify any view you’d like to hold).

(2)  I think the footing also sapped some of my energy.  For the first portion of the race, I was going at PR pace on the gravel — where I maybe should have been going a little slower given the responsiveness of gravel.  I still felt fabulous when I was spit out on the asphalt for the first time.  But it’s hard to say what effect those first 9 miles had on my legs.  Then the next trail portion was pretty sandy, and at the end of that segment, that’s when my legs were totally dead.  Of course, conveniently, that’s when the hills started too.

(3) Altitude.  Internet to the rescue again.  I hear that it takes three to six weeks to fully acclimate to altitude.  Considering my longest run in CO had been 6 easy miles, and I’d been there less than two weeks, it’s likely that the elevation impacted my marathon performance.

What’s next?  This really wasn’t the confidence boost I wanted going into Chicago.  But I’m going to brush this Idaho dust off my shoulder, strap on some new running shoes (I threw my Boston Boosts out because they were so dirty after this race), and do what I can in the next few weeks to feel ready for a new PR!

Has anyone else run this race?  I’d love to hear about your experience!  And if you are interested in this race, I’d be happy to answer any questions you have!